Ann Brashares was born and raised in the Washington, D.C. area with her three brothers. She attended the 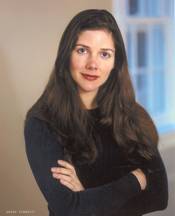 Sidwell Friends School and then studied philosophy at Barnard College, part of Columbia University in New York City. After college she worked in editorial jobs until 2000, when she began her first novel, The Sisterhood of the Traveling Pants, published in 2001. Over the next five years she wrote three sequels–The Second Summer of the Sisterhood, Girls in Pants, and Forever in Blue. In June 2007 she will release her fifth novel, The Last Summer (of You and Me). The Sisterhood of the Traveling Pants was made into a feature film and released by Warner Brothers in 2005. The studio is currently filming a sequel to be released in the summer of 2008. Ann lives in New York City with her husband, artist Jacob Collins, and her three Children, Sam, Nate, and Susannah. They spend summers on Fire Island, NY.